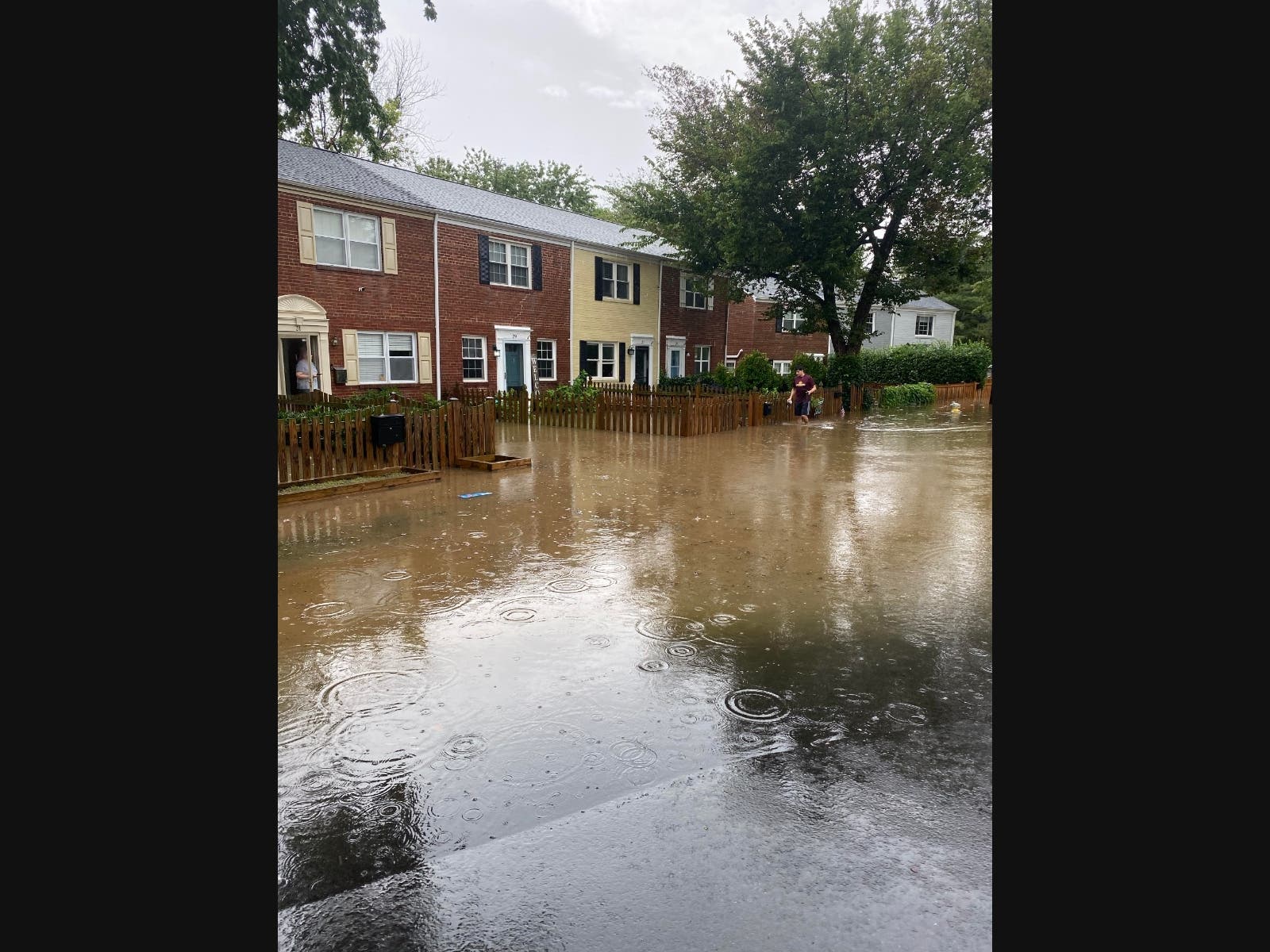 ALEXANDRIA, VA — Vanessa Pineiro could see the drain on her street from a window in her Rosemont home on Sept. 10. Around 1:45 p.m., the drain stopped taking in rain, and water began collecting on the street. According to her estimations, the flooding began 10 to 15 minutes after the drain had filled.

Lucky for her, she had moved her car up the street to avoid flooding, and home repairs tied to the last flash flood on July 23 hadn’t started yet. Around 3 p.m., the water was receding, but the damage was done.

Pineiro and her husband used to live at a house at a higher elevation and bought their newest house even after July 8, 2019, flooding affected the area.

“We bought this house knowing that happened, but it was supposed to be [a] 100-year-flood,” she said, referring to a flood that has a 1 in 100 chance of happening in any year.

Pineiro and her neighbors around the Mount Vernon Avenue cul-de-sac of Rosemont have been impacted by major flooding on Sept. 10, July 23, 2020 and July 8, 2019. Her neighbor, Jeff Reczek, and his family had to find temporary places to stay after flooding in their home on July 8, 2019. Because his home does not have a basement and the flooding affected the first floor, his family had to “depend on the kindness of our neighbors” to find other places to stay while damages were fixed.

On July 23, the water was 2 inches away from coming into Reczek’s house. But neighbors in a lower-lying area weren’t so lucky, with some getting 6 inches of water in their homes. Pineiro said neighbors who were out of town during that storm experienced flooding in their home and truck.

Among the residents Patch spoke to regarding the recent flooding, stormwater system capacity was a key concern.

“The main reason we are in this flood zone is because the infrastructure in that area isn’t suited for [these large] rain events,” said Reczek.

A memo from City Manager Mark Jinks after the Sept. 10 flood supports that assertion. The city uses a “10-year storm” as a stormwater infrastructure design standard, referring to a 10-year storm producing 2.7 inches of rain in an hour or 5.3 inches over 24 hours. Jinks said older areas of the city with storm sewer installed before design standard lack capacity for even a 10-year storm.

“It is important to note that for more than three decades, Alexandria has designed and planned for our sewer system to handle a 10-year storm,” read a memo from Jinks to City Council. “A ’10-year storm’ is an industry criterion for a rain event expected to have [a] historical 10 percent chance of happening every year.”

The two recent floods were more than the city’s infrastructure could handle. The Sept. 10 storm produced 2.5 to 4 inches with rates up to 3 inches per hour, and city officials estimated the July 23 storm produced 60 to 80 percent of the July monthly average rainfall in 30 minutes.

After multiple cases of severe flooding within 14 months and climate change imminent, city officials are exploring ways to accelerate flood mitigation projects and other strategies. On Sept. 22 the Alexandria City Council held a work session to discuss acceleration of flood mitigation strategies and stormwater investments in response to the severe flooding on July 8, 2019, and July 23 and Sept. 10, 2020.

“I think in this case, we’re prodded by three successive events: July ’19, July ’20 and now September ’20 where these unusual very intense storms are happening much, much more frequently, and it is going to force a conversation around how we make the kind of investments in our storm sewer infrastructure to alleviate, if not completely prevent, alleviate some of these flooding challenges that we’ve seen all across the city,” said Mayor Justin Wilson at the Tuesday work session. “I think our residents are expecting or demanding it, and this is one of the most basic services we provide as a community, so we have to step to that challenge.”

Jinks said the increasing frequency of storms will require the city to accelerate some planned projects, look for projects that may now be needed, and partner with private property owners to find solutions. Along with recommending acceleration of work, the city could also provide immediate assistance through expanded eligibility of the sewer backflow prevention program or create a city grant program for property-specific flood mitigation. The latter could be modeled after the sewer backflow prevention program but for floodproofing on properties.

The city is also looking to expand data gathering for rain and stream gauges, as well as expanding warning signs and early warning systems.

A look at capital investments in stormwater projects and stormwater maintenance

“It’s split almost 50-50 for capacity and water quality through the 10-year CIP. But as you know, we need to consider looking at water quality spending, we still have to meet those state and federal mandates,” said Maines. “Maybe we can take the foot off the gas a little bit, but we don’t want to necessarily put it on the brake, because there is some uncertainty for those requirements over time, and also the bay program is also kind of plugging in climate change here, too. So we’re going to see the effects of climate change on the water quality side and the water quality or the flooding side, the capacity side, as that kind of two-front war we’re talking about.”

“We’re seeing an uptick in service requests, and some of those mean spot projects,” said Maines. “So they’re not all big capacity projects. They could be spot projects, as well.”

Stream and channel maintenance relates to the larger channels, such as Four Mile Run, Cameron Run, Backlick Run, Taylor Run and Holmes Run. That maintenance is to ensure the channels can “convey the 100-year storm,” according to Maines. Some recent work has included dredging in Cameron Run in 2018, vegetation removal in Four Mile Run in 2019, Taylor Run in 2020, upcoming Four Mile Run Flood Control work in coordination with Arlington County, and upcoming Holmes Run vegetation removal.

“That was the actually main focus of the stormwater utility when it was adopted in 2017 and implemented in the second half of [fiscal year 2018] was really the focus of those large costly infrastructure projects, those unfunded mandates from that stormwater program,” said Maines.

In terms of maintenance, the city has seven full-time employees to maintain the 185 miles of storm sewer pipes, over 13,000 pieces of stormwater infrastructure, over 100 best management practices on the water quality side, and 26 miles of streams and channels.

Jeff DuVal, a deputy director with T&ES, said maintenance efforts are “proactive” and “reactive” in response to requests for services and observations in the field. The minimum frequency of inspections vary by the type of infrastructure. For example, about 200 “hot spots” known to have flooding issues have inspections before and after major rainfall. Outfalls receive annual inspections or maintenance as needed, while pipes and culverts are maintained in a “reactive” way.

From the major flooding in 2020, around 600 service requests went into the 311 system — that includes 315 from the Sept. 10 flood. Duval said staff are reviewing these requests and identify issues that can be quickly resolved like a clogged inlet or catch basin. However, he said many of the issues are more complex and will require extensive investigation, field work, engineering analysis and design to identify solutions.

One upcoming focus for maintenance is the Hooff’s Run culvert, which handles stormwater from much of Del Ray, Rosemont and parts of North Ridge. The need for inspection and cleaning was identified after the July 2019 flooding, but a six-month cleaning process costing nearly $2 million isn’t expected to start until this fall.

Rosemont resident Chadsey Kittock, who lives near Hooff’s Run, told Patch rain can start to accumulate on the street during a regular storm. She understood her home was on the floodplain, but neighbors have told her they’ve never encountered flooding problems.

That is, until the three major floods of July 2019 and 2020 turned her street into a river. The family’s two cars were totaled in the 2019 storm, and her basement flooded in both storms.

“We had to pay for all of it,” she said, referring to the July 2019 damages. “It was a huge financial burden.”

Rosemont was just one of the areas affected by the flooding. Rose Esber, a resident in a condo building near the King Street Metro station, said her condo garage flooded on July 23 along with the street. Flooding has occurred in this area in 2020, 2019 and 2016. In the flash flooding of July 8, 2019, over 100 cars were lost in the garage between various residences, hotels, and businesses.

Esber sees the flooding as an environmental problem related to climate change as severe storms happen more frequently. She and other residents want to see a plan from the city to address this, but she sees the city’s response as more “reactive” than “proactive.” With that, residents don’t know when another major flood will impact them.

“There’s also a trauma. Every time it starts to rain, there’s panic,” she said.

Flooding has been a regular concern also for Elizabeth Troncoso, a lifelong Alexandria resident who lives in the West End. Although she never had flooding problems living in other areas of the city, she’s experienced flooding every two to three years since moving to her West End home in the 1990s. The first time flooding happened when she moved in, her family lost everything in the basement.

On July 23, the flooding was so bad in her backyard, she described it as”rapids going down our patio.” Troncoso believes the city needs to get engineers to route the water out and provide investments in the sewer system.

T&ES officials see flooding as an issue that both the city and residents can address.

Residents are encouraged to report flooding to the 311 system, attend public forums when announced, and assess their property vulnerabilities. Residents who experience flooding encouraged to consider flood insurance even if they’re not required by living in a floodplain. FEMA is in the process of revising flood maps, which set minimum floodplain standards and can determine the cost of flood insurance.

Preliminary maps are expected in September, public review will happen for 90 days in summer 2021, and new maps will become effective in fall 2022. More information about the process is provided at www.alexandriava.gov/FloodMap.

According to the presentation from T&ES staff, the next City Council work session on flooding mitigation will include discussions on proposed CIP adjustments, proposed maintenance adjustments, neighborhood engagement and technical support framework, a schedule for the flood mitigation grant program, and regulations and policies to consider.