Myles Garrett returned home Sunday. He made his presence known.

The former Martin High School star from just down the road in Arlington finished with two sacks in Cleveland’s victory. His strip-sack of Dak Prescott in the second quarter led to a touchdown and a lead the Browns would not relinquish.

It was the third consecutive game in which Garrett recorded a strip-sack.

“No. 95 is all over the field,” Cleveland coach Kevin Stefanski said. “He is giving us an honest day’s work every time he is out there, playing the run and playing the pass. Really happy for him to be able to do this in his hometown in front of some people who I am sure know him from growing up, friends and family.

“We are going to need him. He is our best player there. We expect a lot from him.”

Quarterback Baker Mayfield credited Garrett for making a big play in a big moment of the game.

“Myles once again changed the game for us,” Mayfield said.

Elliott with another fumble: In 2019 Ezekiel Elliott fumbled only three times, losing two, but he’s already matched those numbers after four weeks this season, including a lost fumble in Sunday’s loss.

Elliott is one of the more dependable players, but his second-quarter fumble after he completed a long run on which he sat on the helmet of a Browns defender before getting stripped led to a Browns scoring drive.

“It’s terrible to turn over the ball,” Elliott said. “We’ve been turning it over too much, me myself specifically. Just need to have more focus and hold onto it. Any time you get the ball and put it on the ground it’s never good.”

Elliott, who finished with 54 yards on 12 carries, said he couldn’t remember what occurred on the fumble because “it happened so fast.”

The Cowboys got behind two scores following Elliott’s miscue and were forced to pass the ball, preventing the run game from getting established.

“Yeah, that’s obvious,” Dak Prescott said. “If we stay up in the game and we get the game in our hands, we’re going to feed Zeke and we’re going to allow him to run the ball and do what he does best and show that he’s one of the best backs in the NFL.”

Safety changes for Cowboys: The Cowboys benched safety Darian Thompson and put Donovan Wilson in his spot in the first quarter. Thompson is part of a struggling secondary, and he was taken out after the first defensive series when Odell Beckham Jr. scored on a 37-yard touchdown reception. Beckham caught the touchdown pass on a throw from fellow receiver Jarvis Landry.

The Cowboys were almost beaten on a similar play in the Week 2 victory over the Falcons, but receiver Julio Jones dropped the apparent touchdown throw from receiver Russell Gage.

On Sunday, Wilson, a 2019 sixth-round pick, finished with a team-high 10 tackles, including a sack on a scrambling Baker Mayfield.

Rough start to rare stretch: Sunday was the first of three consecutive home games. It marks only the fifth time since the team moved into AT&T Stadium that it plays at home in three straight.

The results have been mixed. Here’s how the Cowboys handled these stretches the first four times. 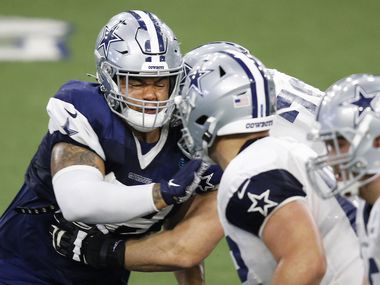 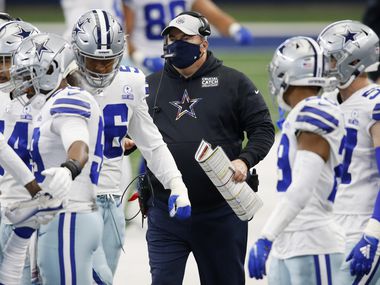