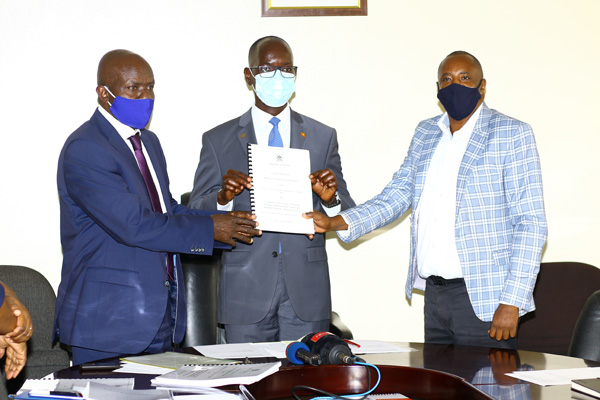 Several assessments
The two firms were selected by the Ministry of Education and Sports after several assessments of a number of consultancy firms that were interested in the job.
Speaking to the media, State Minister for Sport, Hamson Obua, stated that the signing of the contracts is a true manifestation of reviving the sports infrastructures.
“The feasibility study for Buhinga will cost Shs560m while Akii-Bua Stadium will take Shs424m. And it’s entirely a new project,” Obua explains.
According to Obua, the works are expected to begin as soon as possible to be able to give the results of their studies so that they can be presented to the People’s Republic of China, who offered a grant to work on the two stadiums.
Beginning works
By the ended of next week the two firms will be introduced to the Kabarole and Lira Local Government respectively for them to be able to begin their works.
Jackson Muhwezi, the Team Leader and Engineer Thomas Odongo represented Habitat Consultancy while Henry Mwangi signed on behalf of  ICM Consultants, flanked by Nicholas Kwizera.
These two facilities are set to undergo a 90 day’s feasibility study in a bid to further improve them so that they can meet the required standards.

POSITIVE ACTIONS
The continued call for state of art sports infrastructure is an appeal from the general public as a way of bettering the sector. In Uganda, this call has been loudly made over the years in a bid to have as many sports stadia which meet international standards. It is therefore upon this background that the Government has further prioritised the construction of sports infrastructure.