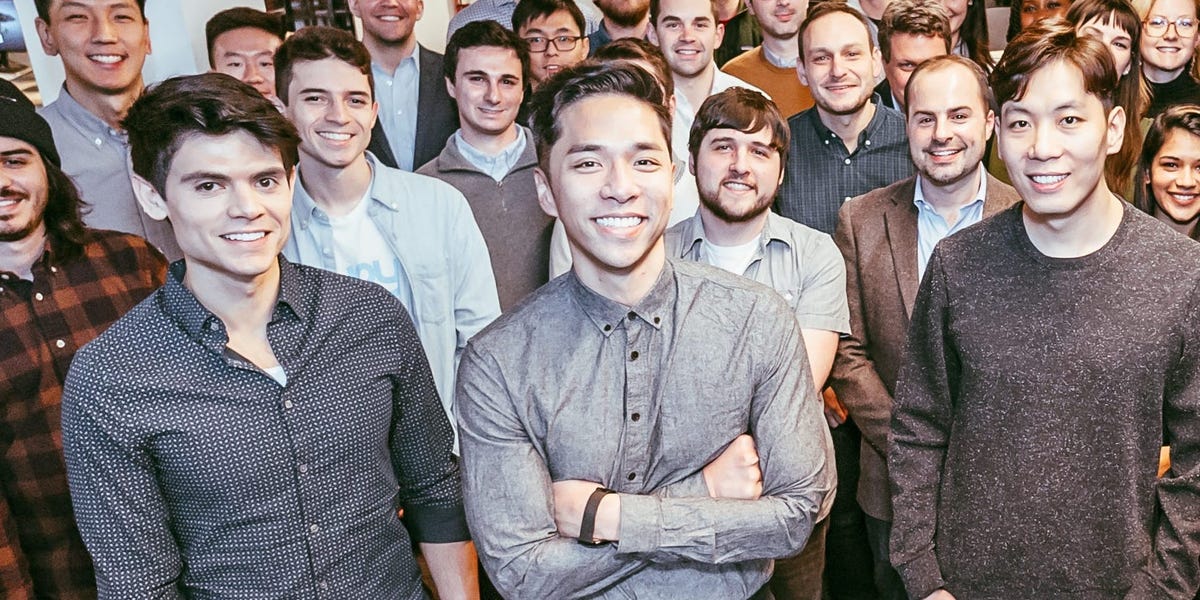 Dr. Andrew Le had little else besides the clothes on his back when he pitched his company idea to investors in 2014.

At the time, he was couch surfing after his apartment burned down in a fire. Even before that, though, he and his three cofounders had been living off the little savings they had.

“My cofounders actually helped me pick through whatever I could salvage” from the fire, Le, 33, said. “But I literally didn’t have a place to live.”

Despite the circumstances, Le didn’t want to give up the dream he had to build a healthcare company. He wanted to create a trusted app people could use to look up their symptoms and discover whether they needed medical help. During his time in medical school at Harvard,  he’d learned that people frequently Googled their symptoms, and they often landed on false information that jeopardized their health.

Weeks after the fire, Le showed up at a pitch competition wearing a T-shirt and jeans. He explained why he was dressed the way he was, then launched into his vision to transform healthcare.

As it turned out, Le’s idea was enough to capture the attention of Boston philanthropist Jack Connors. When they met again two weeks later, Le said Connors told him something along the lines of, “I believe in you because you went up there and you looked like sh-t, but you had a big vision and what you’re hoping to accomplish will do a lot of good for a lot of people.”

Connors, who’s now a board member, became the company’s first angel investor, handing Le a check for $250,000 to start his business.

Today, 9 million people use the tool Le created, called Buoy Health. The company tells its users to “Buoy” their medical problems, and asks them follow-up questions in a chat box. For his work with Buoy, Business Insider named Le one of 30 leaders under 40 who are transforming healthcare.

Buoy chats with patients just like a doctor would and, if they need care, points them healthcare providers that’ll be covered by their insurance.

Le soon learned that allowing people to “Buoy” their symptoms was saving providers time because because patients weren’t going to the emergency room when they didn’t actually need to.

Le said the app was increasing efficiency — something that insurers and employers had a bigger incentive to take part in.

“They ultimately have to foot the bill at the end of the day,” he said.

In contrast, most healthcare providers get paid based on how frequently they deliver care. In 2018, Buoy had a board meeting where they decided to flip their business model.

Le said he wants Buoy to have a relationship with patients that is “similar to the one that you might have with your favorite family doctor,” but at any time of day. The intent, he said, is not to replace doctors but instead to replace the “fear and uncertainty” patients have as a result of not understanding what’s going on in their bodies or how healthcare works.

“I would say what we’re trying to replace is Googling,” Le said.

Read more: Meet the 30 young leaders who are forging a new future for healthcare in the pandemic’s shadow

Today, Buoy works with clients like Humana, Cigna, UnitedHealthcare, and Express Scripts, as well as with some states.

A rush of new clients came after Buoy launched a coronavirus tool in early February. Buoy provided a way for patients to get information about the virus so that fewer people would call in to hospitals and health clinics. It helped keep call centers from getting clogged up.

Read more: There’s a billion-dollar fight brewing over whether doctors should be paid for phone calls and video visits. Who wins could determine the future of healthcare.

When a coronavirus vaccine is available, the company plans to have a tool that’ll help people figure out where they can get it and how to make sure they’re covered. Beyond that, Le wants Buoy to be ready for the surge in medical procedures and doctor visits when people feel safe enough to go out again. Many patients have been avoiding the doctor’s during the pandemic, even when it comes to getting vaccines and routine checkups.

“The rates of strokes, heart attacks, cancer screenings, and appendicitis have all fallen in the emergency room,” Le said. “And it’s not because COVID has made us immune to those things. It’s because people are scared to go to the doctor.”