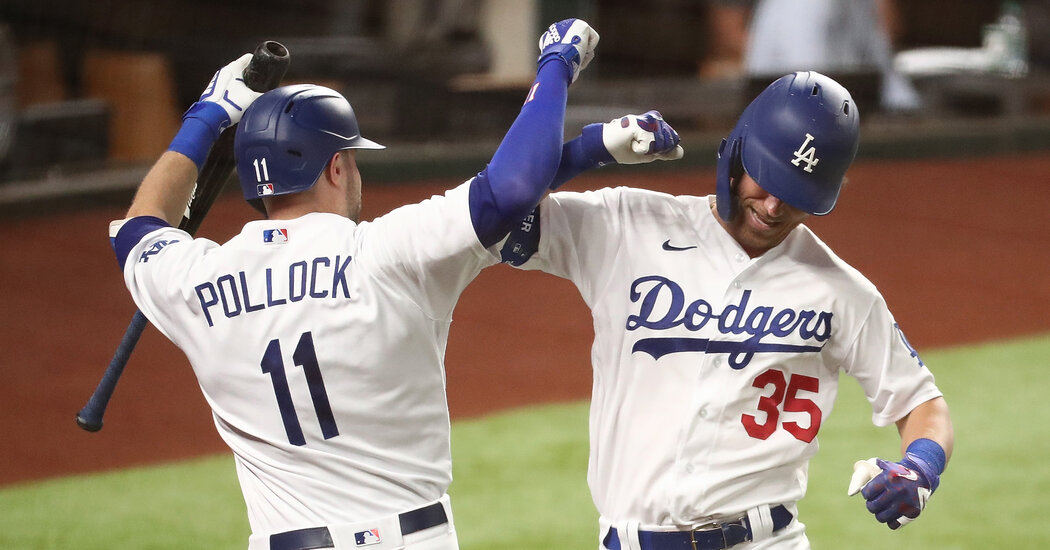 The first two rounds of the Major League Baseball playoffs reflected the modern game: lots and lots of home runs. In 11 of the 12 series before Sunday, 54.8 percent of all runs were scored on homers.

By comparison, the games at Globe Life Field in Arlington, Texas, seemed to be lifted from the 1980s. The ballpark, which opened in July, is the site of the National League Championship Series, which starts on Monday between the Los Angeles Dodgers and the Atlanta Braves. The winner gets to stay in town to play the World Series.

“The park plays big,” said Dodgers Manager Dave Roberts, whose team swept the San Diego Padres in their division series last week in Arlington. “We’ve had the roof open, but it still plays pretty big. It’s a beautiful ballpark. It plays more to the pitcher, but there’s a lot of outfield grass out there for base hits.”

The Dodgers and the Padres combined for 32 runs in their series, but only three came from homers — two solo shots by the Padres and one by the Dodgers’ Cody Bellinger. The small sample followed the regular-season pattern at Globe Life Field, the retractable-roofed, artificial-turf-surfaced home of the Texas Rangers.

The stadium is a graveyard for fly balls. Teams hit just 66 home runs there in 30 regular-season games, and while other venues allowed fewer homers, Globe Life Field had the most depressive effect, according to ESPN’s Park Factor metric, which compares home and road statistics.

It was a harsh new reality for the Rangers, who had spent decades at a homer-friendly outdoor field on the other side of East Randol Mill Road. The Rangers scored the fewest runs in the American League this season, and the ballpark clearly unplugged their power.

“It was real,” said the Rangers broadcaster C.J. Nitkowski, a longtime major league pitcher. “There were definitely a handful of balls that were hit pretty hard that didn’t get out, and even some that were really hit well that barely got out. Joey Gallo hit one out sometime in early September, and you could read his lips: ‘Man, that ball would have been 40 feet over the fence across the street.’

“If you get it, it’s going to go. But especially for the Rangers, they were so used to seeing that ball take off and carry out in right field — and there was zero help on anything. You have to get all of it to get it out.”

The Dodgers and the Braves will certainly try; they ranked first and second in the majors in homers and each has five hitters who connected at least 10 times in the regular season. A generation ago, the teams started their lineups with speedsters like Steve Sax and Otis Nixon. Now, the Dodgers lead off with Mookie Betts and the Braves start with Ronald Acuna Jr. — players with career slugging percentages over .500 to go with other elite tools.

“It shows where our game’s going, compared to what leadoff hitters used to look like,” Braves Manager Brian Snitker said. “And now you look at two guys like that, the skill sets are unbelievable. They both are guys that can beat you with their legs, they can beat you on defense, and obviously the impact they can have offensively — that’s two really talented players.”

Both teams are seeking to end long title droughts, the Dodgers’ dating to 1988, the Braves’ to 1995. The Braves lost to the Dodgers in a four-game division series in 2013, missed the playoffs the next four years, then lost again in four games to the Dodgers in 2018. This is their first meeting in a best-of-seven round.

“When we faced them the last time, I said afterward we weren’t as strong as they were,” said Snitker, who has managed the Braves since 2016. “We’ve made a lot of progress in that regard. We’re a better club now; we’re more well rounded. We’re a stronger team than we were two years ago — our offense, the bullpen, and what we’ve seen out of the young starters is pretty good, too.”

The Braves and the Dodgers are both 5-0 so far in the playoffs, and the Braves’ staff has four shutouts. Their rotation includes Max Fried and the rookies Ian Anderson and Kyle Wright, and their veteran relievers combined for the second-best bullpen earned run average this season, at 3.50.

The best N.L. bullpen, naturally, belonged to the Dodgers, whose unit had a 2.74 E.R.A. While closer Kenley Jansen has looked vulnerable at times, Roberts has expertly deployed two of his young starters — Julio Urias and Dustin May — as midgame, multiple-inning weapons.

With the potential for seven games in seven days in the series, Roberts will use Walker Buehler and Clayton Kershaw as traditional starters, but probably spread the work around in other games. The Dodgers lost four pitchers who combined for more than half of the team’s starts last season — Rich Hill, Kenta Maeda, Hyun-jin Ryu and Ross Stripling — yet the staff may be deeper now with the development of Urias, May and Tony Gonsolin.

“I’m just very fortunate to be around a very good organization, top to bottom, where you can move on from superstars to then arguably get better,” Roberts said.

The Dodgers still need the validation that can only come with a World Series victory, but this could be their best chance. They have won eight consecutive division titles and led the majors in wins and runs scored this season to go with the lowest E.R.A. Their winning percentage (.717) was the best in their history. And while they leaned heavily on platoons in their last N.L.C.S., in 2018, they have settled on eight players who have started all postseason: Betts, Bellinger, Max Muncy, A.J. Pollock, Corey Seager, Will Smith, Chris Taylor and Justin Turner.

Now, for the first time this season, the teams will also have an audience. While California is not allowing fans at the A.L.C.S. in San Diego, the league arranged with local authorities to sell 11,500 tickets per game for the N.L.C.S. and the World Series in Texas. Fans must stay in groups of four, socially distanced from the players and other spectators, and wear masks when not eating or drinking. But tickets have sold out.

“I think it’s going to be kind of neat,” Snitker said. “Maybe we’re crawling back; it’ll be a nice sign if we see people in the stands. I think it’ll make people feel good that we’re trending in the right direction.”