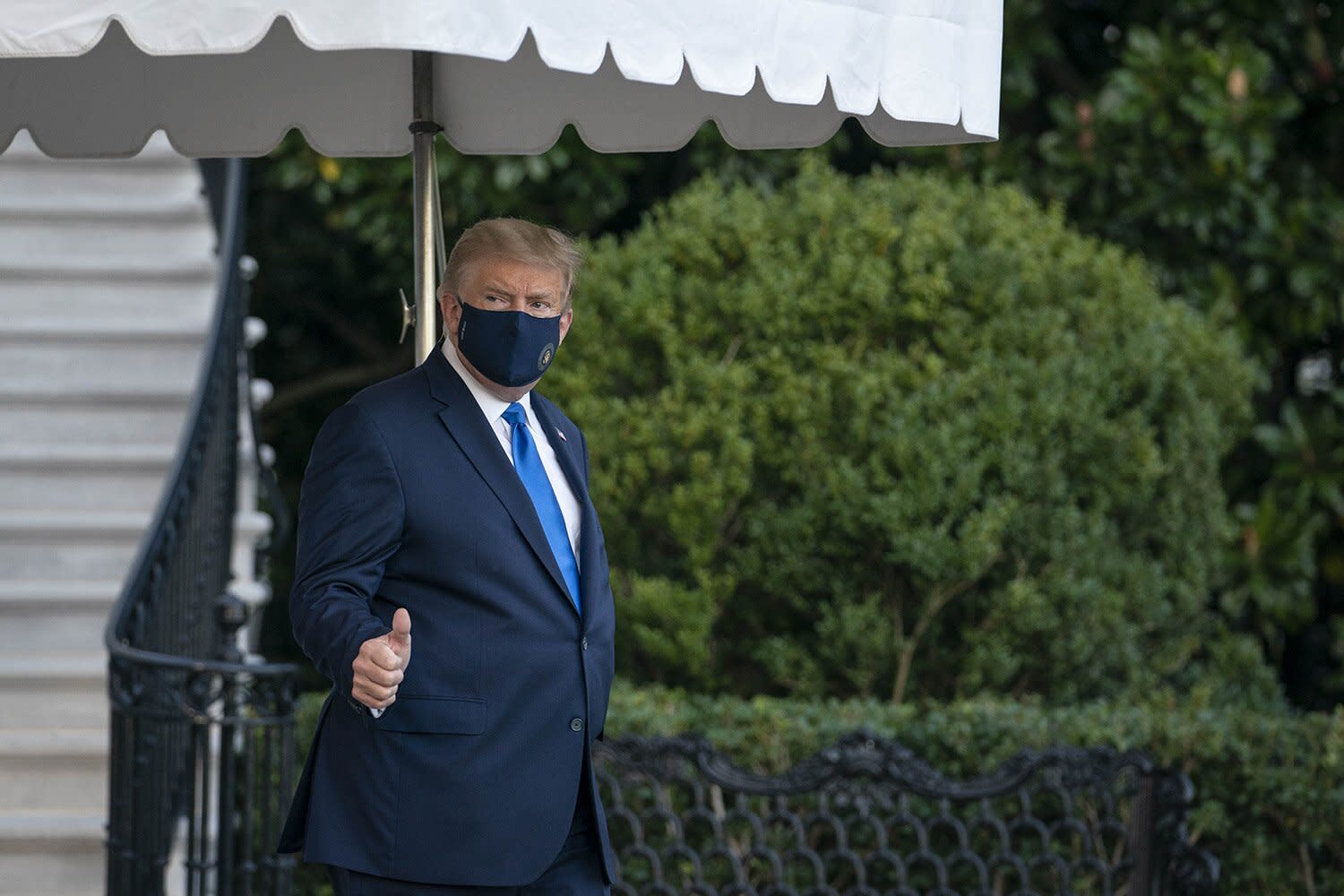 In an announcement that raised more questions than it answered, Donald Trump said Monday he planned to head back to the White House that night, about three days after first being hospitalized with the novel coronavirus (COVID-19).

“I will be leaving the great Walter Reed Medical Center today at 6:30 P.M.,” the president tweeted, touting what he called his administration’s progress on coronavirus treatments.

In a kind of willful rejection of his recent health problems and a pandemic that has killed more than 200,000 people in the U.S., he wrote: “Don’t be afraid of Covid. Don’t let it dominate your life.”

“I feel better than I did 20 years ago!” added Trump, 74, who doctors say has experienced fever and low oxygen.

By all accounts — including his Twitter and comments by his medical team later Monday afternoon — the president appeared to be aiming for a return to normalcy after spending the weekend being treated by doctors at Walter Reed National Military Medical Center, infected by the same deadly virus he had downplayed to the public.

His doctors said Monday that there was still cause for some concern. And there were still some things they wouldn’t say.

“Though he may not be entirely out of the woods yet, the team and I agree that all our evaluations — and most importantly, his clinical status — support the president’s safe return home,” the White House physician, Dr. Sean Conley, told reporters at a briefing outside the hospital.

Conley said that, in the medical team’s view, there was no longer any part of the president’s treatment that he could not receive back at the White House.

Trump would still be monitored by a medical team available 24/7, Conley stressed.

RELATED: What to Know About the Medications Trump Has Taken to Treat His Coronavirus

Sarah Silbiger/EPA-EFE/Shutterstock President Donald Trump walks to the South Lawn of the White House before boarding Marine One on Friday.

While Conley declined to detail some of Trump’s continuing treatments, he and the other members of the medical team at Monday’s briefing said he would receive a fourth dose of the anti-viral drug Remdesivir on Monday before leaving Walter Reed and receive his fifth and final dose on Friday at the White House.

Conley said the president was also continuing to receive dexamethasone, a steroid typically used in more severe COVID-19 cases for patients who have trouble with their oxygen.

“And so long as everything continues on the track that we’re experiencing right now, [the plan] at this time, as the president already tweeted out, is to get him home later today,” Conley said.

“We try to get patients home and out of the hospitals as quickly as is safe and reasonable,” he said. “Every day a patient stays in the hospital unnecessarily is a risk to themselves, and right now there’s nothing that’s going on upstairs here that we can’t safely conduct down at home.”

“I think you’ve seen the videos and now the tweets and you’ll see him shortly,” Conley said. “He’s back.”

The announcement that Trump was being discharged was not quite unexpected, given the president’s documented dislike of illness, reporting that he had grown “bored” by Sunday and a “surprise” car ride he took Sunday afternoon to see supporters outside the hospital.

But the decision for him to leave Walter Reed did not allay persistent questions about the timeline of Trump’s illness, the extent of his symptoms and the trajectory of his recovery — or what would happen if his condition worsened and he had to return to the hospital.

Since Trump first announced he and the first lady were infected on Friday morning, the White House and his doctors have given contradictory information about his condition.

At one point on Saturday, an administration official later identified as Chief of Staff Mark Meadows anonymously told the press that Trump’s prognosis was more concerning than doctors had just said publicly. Conley was also slow to acknowledge Trump’s oxygen levels had fallen.

That confusion, as well as what the president’s team has implied is an attempt to project optimism in order to soothe his moods while he is ill and being treated, have defined the White House’s response in recent days as the virus spreads among the administration’s senior ranks.

Trump’s illness upended the federal government some seven months into a pandemic that has come to define the final year of his first term in office. The president has admitted to minimizing the risks of the virus in public, arguing that he didn’t want to create “panic,” and he has openly waffled on following the advice of his own health experts.

Last week he mocked former Vice President Joe Biden, his rival in the Nov. 3 election, for wearing a mask — then days later announced his diagnosis.

Aides have repeatedly declined to say when Trump’s last negative test was, which would clarify if he was infected at Tuesday’s debate with Biden or during subsequent events.

The source of the infections remains unclear, though many of those who were sickened were at a Sept. 26 event at the White House for Supreme Court nominee Amy Coney Barrett.

Trump tested positive Thursday, after returning from a New Jersey fundraiser, the White House has said.

I will be leaving the great Walter Reed Medical Center today at 6:30 P.M. Feeling really good! Don’t be afraid of Covid. Don’t let it dominate your life. We have developed, under the Trump Administration, some really great drugs & knowledge. I feel better than I did 20 years ago!

Conley, a Navy commander who was named Trump’s physician in 2018, would not discuss the testing timeline on Monday, telling reporters he didn’t want to “go backwards.”

He also said he was not “at liberty to discuss” the president’s lung scans or X-rays and whether they show lung damage or pneumonia, citing federal privacy laws.

Later in the briefing, Conley seemed to suggest Trump had not authorized him to talk about certain parts of his health.

Conley said the medical team would be working to safely accommodate wherever the president wanted to work in the White House, either in the residence or Oval Office.

Asked about his advice for Trump traveling again — including on the campaign trail — Conley said only, “We’ll see.”

And about Trump’s car ride on Sunday, with Secret Service agents with him in a sealed vehicle where he was masked but infectious, Conley said, “The president has been surrounded by medical and security staff for days wearing full PPE [personal protective equipment] and yesterday the U.S. Secret Service agents were in that same level of PPE for a very short period of time.”

Speaking anonymously, some agents had criticized the trip in comments to The Washington Post and other news outlets.

Melania Trump, meanwhile, has been recovering in quarantine at the White House and said she has had mild symptoms. The president is at a higher risk of serious complications from the virus, according to health experts.

“He’s 74, he’s male and he is slightly overweight,” Conley said Saturday. “Other than that, he’s very healthy.”

Conley said Monday that doctors would be looking for Trump to no longer show any signs of live virus in measuring his recovery. That may be 10 days from infection or shorter or longer, he said. Doctors will also be examining the president clinically, asking him about how he felt over time.

“We all remain cautiously optimistic and on guard because we’re in a bit of uncharted territory when it comes to a patient that received the therapies he has so early in the course,” Conley said, adding, “We’re looking to this weekend. If we can get through [next] Monday with him remaining the same or improving — better yet — then we will all take the same deep sigh of relief.”

Conley said Trump had not been on any fever-reducing medications for 72 hours and had been without fever for more than that same period of time. Conley also said that the president had previously shown dehydration, on Friday, and a slight cough but recovered or was no longer complaining about either symptom.

He said that Trump’s two episodes of his oxygen levels dropping had not involved Trump being “short of breath” or looking ill. He said Trump had not shown muscle aches.

“He’s up and back to his old self, predominantly,” Conley maintained.

Asked if anyone on the medical team advised against the president being discharged, Conley looked around at the other doctors at the briefing and he shook his head no.

Conley acknowledged he had some concern about his personal risk of exposure to the virus but said he was an essential worker who was taking precautions.

When a reporter mentioned Trump’s tweet not to be “afraid” of the virus and asked Conley’s opinion, he replied, “I’m not going to get into what the president says.”

On Monday morning, Trump appeared to be more active, unleashing a familiar tweet storm early in the day with quick, all-caps posts such as “Pro Life. VOTE!,” “401(K). VOTE!” and “STRONGEST EVER MILITARY. VOTE!”

CNN reported Monday that sources familiar with Trump’s activity at Walter Reed said the president was on the phone telling aides, “I need to get out of here.”

The list of White House staffers who have tested positive for the virus continued to expand Monday, as Press Secretary Kayleigh McEnany confirmed she was sick.

The New York Times further reported that Karoline Leavitt and Chad Gilmartin — both members of Trump’s press team — had tested positive for the virus, while two residential staff had also been infected.

As information about the coronavirus pandemic rapidly changes, PEOPLE is committed to providing the most recent data in our coverage. Some of the information in this story may have changed after publication. For the latest on COVID-19, readers are encouraged to use online resources from the WHO and local public health departments. PEOPLE has partnered with GoFundMe to raise money for the COVID-19 Relief Fund, a GoFundMe.org fundraiser to support everything from frontline responders to families in need, as well as organizations helping communities. For more information or to donate, click here.