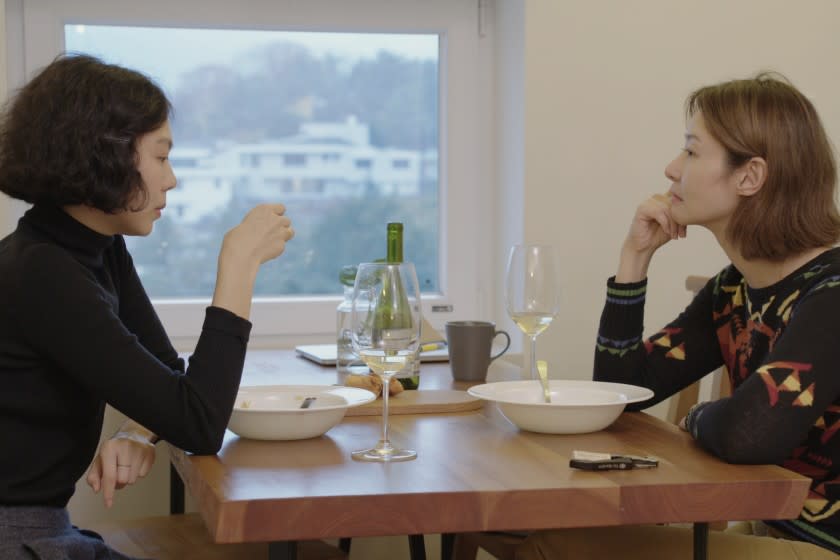 In the very last scene of Hong Sang-soo’s “The Woman Who Ran,” a character does something that briefly filled me with envy: She walks into a movie theater, sits down and loses herself in the image playing on the screen.

It’s a simple, exquisite moment in a picture full of them, but it feels particularly emblematic of the special longing produced by the just-concluded 58th New York Film Festival. Under normal circumstances, this lovely latest feature from the prolific Hong, a NYFF regular, would have played in a theater itself — specifically, one of the festival’s signature Lincoln Center venues, the Walter Reade Theater and Alice Tully Hall. Instead, with the pandemic still raging and the festival having gone mostly virtual, “The Woman Who Ran” played at drive-in venues in New York and on home TV screens across the country, my own included. (It’s being released in the U.S. by Cinema Guild.)

Some might argue that the relative modesty of Hong’s point-and-shoot aesthetic fits more naturally on a smaller screen than some of the festival’s bigger, more elaborate visions. Apart from that theater and some occasional glimpses of mountain scenery, most of “The Woman Who Ran” unfolds mostly in home kitchens and living rooms, where the central character (played by Kim Min-hee) catches up with old girlfriends, gorges herself on food and reveals a flicker of sadness beneath her placid, agreeable surface. Few directors are more attuned than Hong to their characters’ shifting moods and understated anxieties; working with characteristic wit and sly structural repetitions, he brings this deft, unassuming story to a startlingly emotional place.

Even under less-than-ideal viewing conditions, then, it wasn’t hard to lose myself in these particular images. Don’t get me wrong: I’d have much rather have seen “The Woman Who Ran” in a theater; ditto another NYFF highlight like “Days,” a gorgeous new movie from the Taiwanese auteur Tsai Ming-liang. Still, there is something about watching films in which ordinary people go about ordinary domestic tasks — peeling an apple in “The Woman Who Ran,” or preparing a dinner of fish and vegetables in “Days” — that becomes weirdly riveting when seen in the context of your own home. It’s as if this cinematic slice of life had briefly become an eerie projection of your own routine, transmuting mundane activity into something hypnotic, reassuring and strange.

Set to be released through Grasshopper Film in the U.S., “Days” is Tsai’s first new feature in several years, and it feels like a pure distillation of a sensibility — predicated on fixed-camera long takes, gossamer-thin narratives and subterranean emotional depths — that has often been described as minimalist. It’s a dismissive term that makes sense only if you accept that maximalism, which usually translates to spoon-fed stories, showy performances and obvious takeaways, should somehow be the medium’s default setting. One of the reasons NYFF remains an essential destination for cinephiles, even in this radically impacted year, is that it realizes the centrality of auteurs like Hong and Tsai to its mission. It sees the value of art that cuts through the noise, in every sense.

Which is not to suggest that this festival proceeds only at a low volume, or that it is devoted to only one kind of programming. The 24-day event got off to a glorious and not exactly quiet start Sept. 17 with the world premiere of “Lovers Rock,” a gorgeous blur of song, dance, romance and community, and one of five films in British director Steve McQueen’s “Small Axe” anthology, made for the BBC and Amazon Studios. The other two “Small Axe” titles selected for the NYFF main slate, “Mangrove” and “Red, White and Blue,” cast a stirring light on acts of collective and individual resistance from within London’s West Indian community, in response to racist persecution by the city’s police.

The electrifying “Mangrove,” set between 1968 and 1970, unfolds in and around a newly opened Caribbean restaurant in Notting Hill whose Black owners and patrons draw immediate, sustained harassment from police. The landmark trial that follows invests the familiar conventions of the courtroom drama — the stirring speeches, the blistering cross-examinations — with furious cinematic energy and ample dramatic fireworks, especially from Shaun Parkes, Letitia Wright and Malachi Kirby as three of the Mangrove activists. (The movie also stands as a fascinating companion piece, and in some ways a corrective, to Aaron Sorkin’s current “Trial of the Chicago 7,” another account of a landmark legal case from roughly the same period.)

Less sweeping than “Mangrove” and more intimately focused, “Red, White and Blue” is effectively an origin story for Leroy Logan (a never-better John Boyega), who joins the Metropolitan Police in 1983 hoping to combat the institutional racism that has already hurt his community and his family. Logan will go on to become an important advocate for diversity and reform over his three-decade career. But this close study of the dynamics of power confines itself, with daring economy, to the dawn of his mission, suggesting how small, determined steps can produce a mighty spirit of resistance.

I’m looking forward to the other two “Small Axe” titles, “Education” and “Alex Wheatle,” but on the evidence of the first three we’ve seen, McQueen’s ambitious anthology already looks like one of 2020’s dramatic highlights: a work that burrows deep into the past and speaks with effortless clarity to the present. (The films will premiere over five consecutive weeks on Amazon, beginning with “Mangrove” on Nov. 20.)

Azazel Jacobs’ new comedy, “French Exit,” which brought the festival to an entertaining if uneven close Oct. 11, feels temporally unmoored by comparison. Ostensibly set in the present day, and adapted by Patrick deWitt from his own 2018 novel, it’s the kind of exercise in elegantly studied drollery that can’t help but hark back to an earlier decade, perhaps when the likes of Wes Anderson and Whit Stillman were first establishing their wittily intricate and highly imitable cinematic universes.

The movie’s raison d’être is Michelle Pfeiffer’s unsurprisingly superb lead performance, which sparked immediate, even reflexive Oscar buzz. Delivering a master class in expressive sneering and cigarette wielding, Pfeiffer plays Frances Price, a wealthy but soon-to-be-impoverished New York widow who impulsively engineers a swift Parisian getaway with her teenage son (Lucas Hedges). It’s another story, then, about a woman who ran, and what she finds upon her arrival — a small community of loners and misfits played by actors including Danielle Macdonald, Isaach De Bankolé and a terrific Valerie Mahaffey — is not without its charms, though I suspect some of deWitt’s archer inventions worked better on the page. (Sony Pictures Classics plans to release “French Exit” in theaters in February.)

For all the necessary shifts in strategy this year, and despite its clutch of high-profile world premieres like “French Exit,” the NYFF programming MO remains largely unchanged: to provide audiences with a meticulously curated snapshot of the best in world cinema, much of which has already played at earlier festivals. Some of the excellent documentaries in the main slate, like Michael Dweck and Gregory Kershaw’s charming “The Truffle Hunters” (a forthcoming Sony Pictures Classics release) and Garrett Bradley’s haunting “Time” (which begins streaming this week on Amazon Prime Video), first played to great acclaim at Sundance. Both “The Woman Who Ran” and “Days” won prizes back in February at the Berlin International Film Festival.

From Germany and Georgia

So did “Undine,” a beguiling departure from Christian Petzold, the first-rate German director known for his doomy romantic noirs like “Phoenix.” In this rare foray into the realm of the supernatural, Paula Beer plays Undine, the water nymph of European mythology, who falls in love with a mortal (Franz Rogowski). The romance that follows may not have the unerring craftsmanship of Petzold’s earlier work — especially his brilliant “Transit,” which also paired Rogowski and Beer — but it’s quietly, implacably moving nonetheless. (IFC Films has acquired U.S. distribution rights to the movie.)

I’ll end with “Beginning,” an aptly titled debut feature from the Georgian-born filmmaker Dea Kulumbegashvili. Focusing on one woman (the remarkable Ia Sukhitashvili) and her response to the violence that engulfs her Jehovah’s Witness community, the movie unfolds as a series of immaculately composed scenes whose chilling concentration owes something to Michael Haneke and also something to the late Chantal Akerman, whose “Jeanne Dielman” is an obvious touchstone. “Beginning” has been making the most of this impacted fall season: Originally selected for this year’s Cannes before that festival’s cancellation, the movie premiered at Toronto, where it won the FIPRESCI critics prize, and then went on to win the top award at the San Sebastián Film Festival. It’s a reminder that the potential for great discoveries never ceases, even when business as usual does.