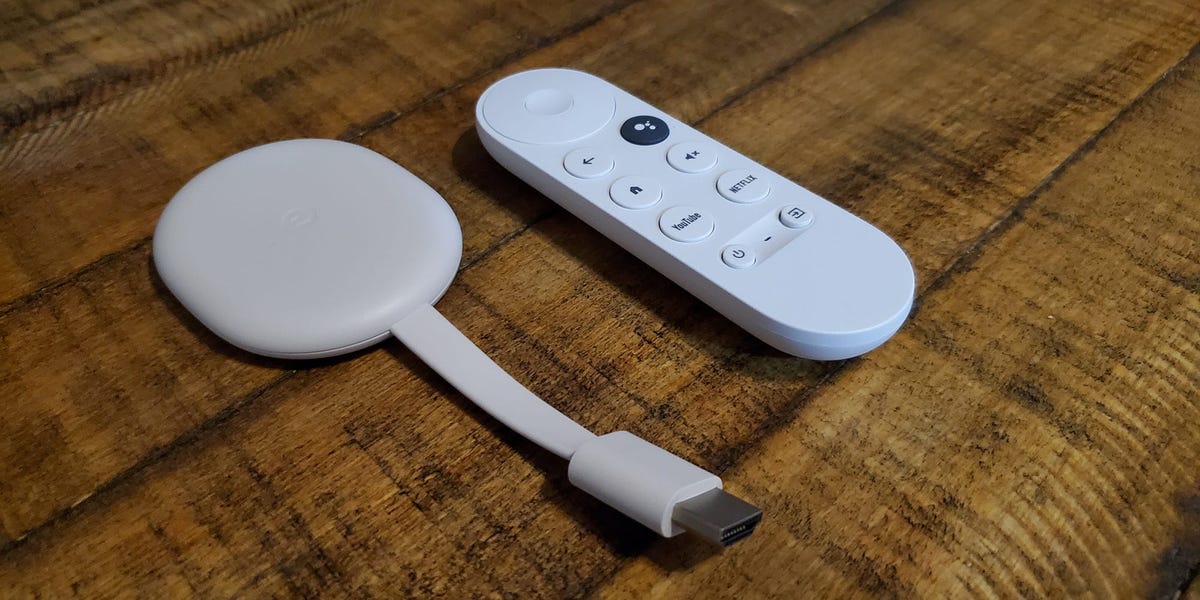 Though that feature is certainly handy in its own right, having to rely on a mobile device as a source can be an inconvenience, especially when you simply want to plop down on your couch, grab the remote, and start streaming. This design choice also puts the Chromecast at odds with other streaming sticks and boxes that let you play apps on your TV without any additional components.

This brings us to Google’s brand-new Chromecast with Google TV. While the $50 dongle looks similar to older versions, the new model now includes a full-fledged on-screen interface complete with built-in app support and a voice remote. You can also still cast all your favorite services from a smartphone or computer if you prefer. In other words, it’s the best of both worlds.

Google provided Insider Reviews with a review unit ahead of the new Chromecast’s launch, and after spending a couple days with the device, I find that it performs well and shows a lot of promise. That being said, it’s important to note that this review is based on initial impressions, and it’s possible that new issues could arise or existing flaws could be fixed over time.

With that in mind, we’ll update the review if there are any noteworthy developments as we spend a bit more time with the Chromecast.

Like the Chromecast Ultra, the new Chromecast with Google TV takes the form of a thin, puck-shaped dongle that plugs directly into the HDMI port of your TV. A small “G” logo is etched onto the center of the puck. In contrast to the older model, the new version is more oval in shape rather than circular.

We received an all-white model, which Google calls “Snow.” “Sky” and “Sunrise” color options are also available. In general, I like the white color scheme as it gives the device a slick, clean look.

An HDMI cable is built right into the Chromecast and measures about 2-inches, which is just enough to let the Chromecast gently hang from your TV’s HDMI port. A USB-C connection is also integrated to connect the included power cable. Unlike the Chromecast Ultra, the new Chromecast with Google TV does not include an Ethernet port for a wired internet connection.

A compact voice remote is also included, which is a first for the Chromecast lineup. The handy remote matches the color of the Chromecast and includes a circular click pad for navigation, along with buttons for Google Assistant, back, home, mute, YouTube, Netflix, TV power, and TV source. Volume buttons are also present on the side. Minimalist yet perfectly functional, the remote has all the major options you need, and the buttons have a solid feel.

Setting up the Chromecast is a fairly simple process, but it does require the Google Home app on an iOS or Android device. You just need to unpack the device, connect the power cable, and then plug the Chromecast’s integrated HDMI cable directly into your TV’s HDMI port.

After you boot the device on, the on-screen interface will ask you to use the Google Home app on your smartphone to scan a QR code on the screen to continue the process. After some other general housekeeping items, including inputting Wi-Fi settings, signing into your Google account, and accepting various terms of service, the Chromecast will download updates and restart.

You can then select which services you’d like to be included in your app library, and configure the remote to work with most TVs, soundbars, and receivers.

With all that out of the way, you’re basically good to go. It’s worth noting, however, that the Chromecast defaults to forcing HDR on all the time if you have an HDR TV. This causes SDR content to look overly saturated and artificial. To fix this, you simply need to activate the “Match content dynamic range” option in the display settings menu. If you have an HDR TV, I highly recommend doing this, and I wish Google had simply kept that on by default.

Unlike previous Chromecast models, the new Chromecast comes with its own dedicated interface and built-in selection of apps. Instead of using the Android TV platform found on some smart TVs and media players, however, the Chromecast marks the debut of the brand-new Google TV interface.

I’ve always found the Android TV platform to be perfectly serviceable but a bit drab and barebones in appearance and navigation. The new Google TV interface offers a nice upgrade, presenting a more visually appealing system with some quality of life improvements.

On the downside, the new look is now eerily similar to other popular streaming platforms and apps, like Fire TV, Apple TV, and Disney Plus. That’s not necessarily a bad thing, as this general style works well, but it is a bit boring how interchangeable the design of these different services has become.

Google TV offers an attractive home screen, dubbed “For You,” which features rows of icons for content recommendations, your favorite apps, recently watched titles, and specific content categories. A horizontal menu across the top of the screen lets you access additional hub pages for Search, Movies, Shows, Apps, and Library.

The Library section offers easy access to any titles you’ve purchased from Google Play or YouTube, along with access to a Watchlist that you can add titles to from any app available on Google TV. This offers a convenient way to keep track of movies and shows you’d like to watch, even if they’re all on different services.

A seventh hub page, called Live TV, is also available if you subscribe to YouTube TV. This tab makes it simple to jump right into live TV with easy access to the channel guide. Though YouTube TV is the only live service currently supported, Google plans to add support for other live services and apps in the future, making it easy to watch all your live content in one place.

Navigation is generally responsive with fairly snappy performance while moving between menus and apps. I did encounter some sluggish moments early on in use, however, with some lag between launching certain apps or returning to the home screen from Netflix. There was also an odd but isolated issue where the screen would go grey for about five seconds and refresh the menus.

More bothersome was an instance where all video streaming seemed to stop working except for YouTube. Though all the apps would load and allow me to browse content, an error message would pop up every time I tried to launch a video. Restarting the device fixed the problem and I haven’t encountered it since.

Occasional sluggish moments and isolated glitches like those aren’t a big deal as long as they don’t become recurring issues. Based on my initial time with the unit, the Google TV offers navigation and usability that’s on par with similar compact 4K streaming devices.

Finally, Google TV also allows you to use the included remote to access Google Assistant for voice search and other digital assistant functions. Searching for shows and launching apps with the Google Assistant is a breeze, and the voice remote can also be used to initiate playback from Nest speakers or pull up footage from a connected Nest security camera on your TV screen.

No matter how pretty an interface might be, it’s all meaningless if the streaming apps don’t end up playing correctly. Thankfully, playback performance is generally strong on the new Chromecast.

For testing purposes, I sampled a variety of shows and movies from different apps, including Netflix, Disney Plus, Hulu, Prime Video, HBO Max, Vudu, FandangoNow, Movies Anywhere, YouTube, and more.

Whether reliving the ’90s by binge-watching old episodes of “ER” on Hulu, or tuning into the latest episode of Amazon’s “The Boys” in full 4K HDR10+, playback is smooth, sharp, and free from any audio sync issues.

Dolby Atmos surround sound comes through correctly from supported apps, though I’m disappointed to see that Atmos support is not currently available through the Chromecast’s Disney Plus app.

More concerning, though, is the odd lack of 4K HDR support for a few key services that usually offer this option on other streaming devices. Vudu, Movies Anywhere, and FandangoNow are all currently locked to HD and standard dynamic range. For comparison’s sake, all of these apps offer 4K HDR support through a Roku Streaming Stick+.

I’ve reached out to Google to see if updates for these services are a possibility and I’ll update this section when I hear more. On the plus side, the Netflix, Disney Plus, Amazon Prime Video, YouTube, and Google Play apps all offer strong 4K HDR performance

Though I typically prefer to use the device’s on-screen interface, casting remains a major playback feature for the new Chromecast. Whether streaming videos from various Chromecast-enabled apps on my Samsung Galaxy S10 smartphone, or streaming my web browser directly from my Windows laptop, casting works without any major issues, seamlessly transmitting the image to my TV.

Google’s brand-new Chromecast with Google TV presents a sizable step forward for the Chromecast lineup. In addition to the casting support buyers are familiar with, we finally get an integrated interface with on-screen apps and a voice remote. There are some minor drawbacks and issues with HDR playback from some apps, but general performance is strong.

Should you buy it?

Though I’ve been hesitant to recommend older Chromecast models over similarly priced streaming options from the competition, the new Chromecast with Google TV has virtually all the features buyers are looking for. General performance is strong and, at $50, it’s competitively priced. If you’re looking for a compact streaming solution with 4K playback from Netflix, Amazon, and YouTube, the new Chromecast is a worthy purchase, especially if you’re already plugged into the Google ecosystem.

However, if you’re hoping to stream 4K HDR digital rentals and purchases from services like Vudu, FandangoNow, and Movies Anywhere, the current app limitations might be a deal breaker. This is something that could potentially be addressed in future updates but, for now, 4K HDR playback is limited to a disappointingly small selection of services.

What are your alternatives?

When it comes to other $50 compact streaming devices, the Amazon Fire TV Stick 4K and Roku Streaming Stick+ are both worth considering.

The Fire TV Stick 4K includes similar HDR capabilities as the new Chromecast, with support for HDR10, HDR10+, and Dolby Vision. With that said, Amazon’s device is missing a few notable apps, including HBO Max, Peacock, and Vudu. It does feature the Apple TV app, however, which the Chromecast is missing. You won’t get Google Assistant on the Fire TV Stick but integrated Alexa support is included instead.

Meanwhile, the Roku Streaming Stick+ is also a solid option. On the downside, Roku’s device only supports HDR10 and does not offer HDR10+ or Dolby Vision playback. On the plus side, the app selection is extensive and includes the Apple TV service, but HBO Max is still missing. And, though it’s compatible with separate Google Assistant or Alexa devices, the remote uses with Roku’s own voice search system.