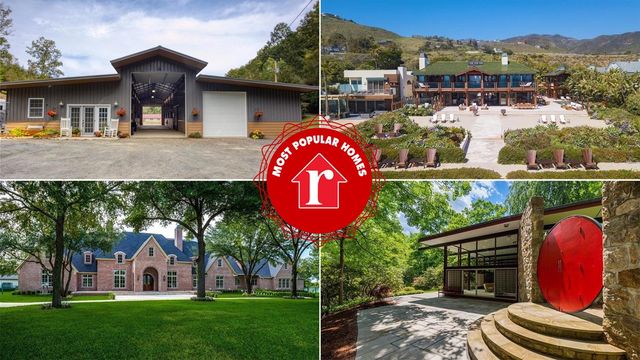 Pierce Brosnan‘s magnificent mansion recently landed on the market in Malibu, CA, accompanied by a whopping $100 million price tag. Curious celeb watchers wanted to see exactly what nine digits of dough would buy, and those clicks made the beachfront retreat the most popular home on realtor.com® this week.

The spread is a tranquil and lush Thai-inspired tropical dream, sitting on a full acre along what’s arguably the world’s most exclusive beach. Swirling with ocean breezes and outfitted with its own spa, guesthouse, and saltwater pool, it now needs an ultra-wealthy buyer who shares Brosnan’s exquisite vision.

But the actor’s abode wasn’t the only fabulous multimillion-dollar pad you clicked on this week. The midcentury Japanese-inspired former home of the jazz great Dave Brubeck proved popular, as was a Pennsylvania property with the stately moniker “Barn at Walmere,” listed for $3.2 million.

There’s also a brand-new, 23,000-square-foot megamansion in the suburbs of Dallas and a modern palace in Illinois with three kitchens on the market for $3.5 million.

Even the homes under a million bucks on this week’s list are notable. For just under a million, you can pick up a house once owned by former Clemson football coach Danny Ford, or the Victorian house that served as the home of the fictional serial killer Buffalo Bill in “Silence of the Lambs.”

We won’t ask you to pick your favorite from the 10 notable homes below, but we do ask that you spend time perusing all this week’s most popular homes…

Why it’s here: You could honestly lay claim to living in a barn. This state-of-the-art barn has stalls and hay storage, as well as living quarters with a full bathroom and kitchen.

There’s also a cabin, historic barn, and plenty of pasture on the more than 28-acre property.

The possibilities are limitless—the buyers could keep the place as is and live close to their horses or build a dream home surrounded by acres of privacy.

Why it’s here: This iconic, Japanese-inspired home was built in 1963 for the jazz musician Dave Brubeck by the architect David Thorne.

The huge, eight-bedroom midcentury residence was designed to flow along with its natural surroundings.

Luxe features include an indoor heated pool and spa, a wraparound porch and solarium, plus a living room overlooking two brooks, a pond, and fountains. The music studio has 20-foot ceilings, a windowed wall, and a balcony.

Why it’s here: Massive by any measure, this 16-acre estate includes a Victorian-style mansion built on a hilltop in 2000 with 13,286 square feet of living space.

Now operated as the Hurst House Bed and Breakfast, the inn boasts an elevator, a custom kitchen, and grand spaces for entertaining.

Outside, the home is surrounded by patios, water features, and a koi pond.

Why it’s here: The Barn at Walmere is a 6-acre property anchored by a stone barn originally built in 1801.

It was converted into an elegant home in 1985 and then enlarged in 1990 to its current footprint of three bedrooms and 4,077 square feet of living space.

Open and full of natural light, the space can easily host a crowd or serve as an enviably quiet work-from-home setup. It’s close to Philadelphia, with private aviation access nearby for a quick commute anywhere in the country.

Why it’s here: Built in 2019, this mansion just 30 minutes outside Dallas awaits its final finishes. The big brick house sits on more than 5 acres and has a massive 23,000 square feet of space to spread out.

It comes with a 2,700-square-foot guesthouse, as well as a 30-foot-by-50-foot indoor heated pool with views of the lake just outside.

Why it’s here: Charming and delightful, this four-bedroom home has had only four owners since it was built in 1931.

The oak floors have been refinished, the kitchen has been renovated, and plenty of other updates await a buyer.

Why it’s here: Custom-built in 2006, this seven-bedroom mansion has three kitchens, six fireplaces, two bars, and a wine cellar.

Thanks to those key amenities, the residence has served as a venue for several high-end events.

The gated property also boasts a walkout lower level with a theater, kitchenette, gym, and billiard-room.

Dubbed the Kingsmore House, the five-bedroom residence is well-known to the Clemson community.

It was built in 1983, but it’s been updated and includes a full basement with a kitchen, outdoor living and entertaining spaces, as well as a pool and poolhouse.

Why it’s here: This unassuming four-bedroom was built in 1910, but it became famous after its appearance in the 1991 movie “Silence of the Lambs.”

Before its most recent sale, in 2016, one of the chief sticking points was not any lingering bad juju associated with its connection to a fictional serial killer. Instead, it was the home’s lack of a second bathroom to accommodate its four bedrooms.

Setting that aside, the three-story Queen Anne Victorian sits on a lovely, almost 2-acre lot along the Youghiogheny River. It includes a detached three-car garage and a vintage caboose sitting out back by the in-ground pool.

Why it’s here: The actor Pierce Brosnan is shooting for the moon in Malibu—and it’s not impossible that he might get it. Nine-digit price tags are now the norm for highly coveted properties in Malibu, and Brosnan’s acre, spread along the sand, more than fits the bill.

The estate, with 117 feet of beachfront, is a lush and tropical retreat inspired by the architecture of Thailand.