During a press conference on Tuesday morning, JCPS Superintendent Marty Pollio talked about the $40 million dollar renovation of the Academy @ Shawnee, while also imploring the community to support the JCPS ballot initiative in November.

LOUISVILLE, Ky. — By the end of next summer, the third floor of the Academy @ Shawnee should be back open to students and staff at the west Louisville school.

The expected reopening date ahead of the 2021-22 school year will mark 40 years since the third floor was condemned because of structural issues.

And it will coincide with the completion of a roughly $40 million renovation of the magnet middle and high school that has also featured improvements to Shawnee’s library, auditorium, gym, classrooms, natatorium, hallways and other areas.

The looming completion of that work on the school at 4001 Herman St., which dates back to 1929, may seem to mark the closing of another chapter in its history.

But Kym Rice, the Academy @ Shawnee’s principal, views it differently.

“This is just the beginning of what the Academy @ Shawnee will look like,” Rice said Tuesday while standing in the new library space. “…I really cannot wait for our students, our staff and our families to come back to our building and see all the changes we made.” 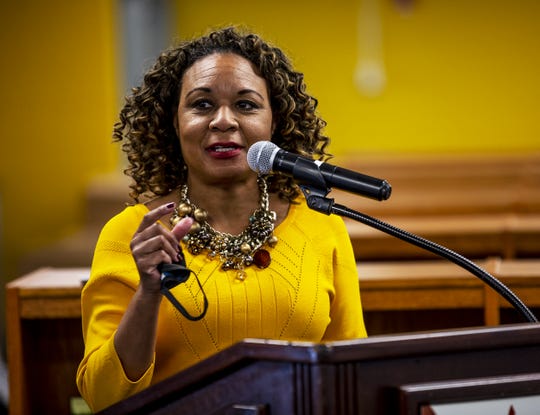 Shawnee principal Kym Rice speaks about the work being done as part of a $40 million renovation of the Academy @ Shawnee during a press conference Thursday morning. Oct. 6, 2020 (Photo: Jeff Faughender/Courier Journal)

Rice and other Jefferson County Public Schools officials led reporters Tuesday morning through a hard-hat tour of the school, which buzzed with the sounds of construction as it otherwise remains closed during the COVID-19 pandemic. John Niehoff, a JCPS architect for the renovation, explained how the first phase of the project was finished over the summer, when crews freshened up the 1962 addition to the school, including the more centrally located library space.

The first phase also created a new senior lounge and cafeteria near the front of the school off Market Street, a pre-nursing and early childhood care suite to assist students in one of the school’s career programs, four new classrooms in the old library space and new ceilings.

Academy @ Shawnee principal Kym Rice says she is ‘thrilled’ at the progress and cannot wait to show everyone the results.

Rice said Shawnee students provided “a lot of input” on the renovation, including calling for the new senior lounge.

Niehoff said work on the school’s first-floor Neighborhood Place, which offers community-based services, and the historic natatorium will be completed this fall.

The renovation of the third floor and the school auditorium, as well as work on the main office area and a new middle school media center, will be completed by the end of next summer, with greater accessibility also part of the makeover.

As they maneuvered hallways Tuesday filled with construction supplies, exposed lighting and the sound of saws and drills, officials noted that the historic feel of the school will be maintained throughout the work.

Niehoff said the Academy @ Shawnee is altogether about 344,000 square feet, which officials say makes it the largest Jefferson County school and also possibly the largest school in Kentucky. 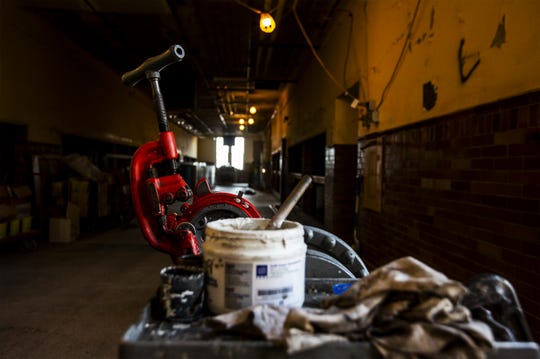 Hallways on the third floor of the Academy @ Shawnee, which had been closed off since the early 1980s, are currently undergoing a $40 million renovation and are slated to be completed in 2021. (Photo: Jeff Faughender/Courier Journal)

But despite its cavernous feel, Shawnee currently enrolls just 538 students, according to JCPS.

The condemned third floor and other facility issues have played a factor in keeping more students and families from choosing Shawnee over the years, JCPS Superintendent Marty Pollio said. 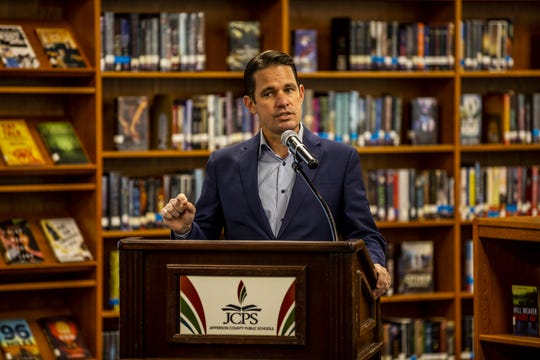 He noted Tuesday that “this place is special to me.”

Shawnee is where Pollio started his JCPS career in 1997 as a social studies teacher and basketball coach. (“I think I got the job because I was the only applicant,” he quipped.)

As a young teacher, Pollio said he was struck early on when a colleague explained how the upstairs floor at Shawnee was condemned.

“I could not understand how we could possibly have a school building with a condemned floor,” Pollio said Tuesday. “How is that possible? What message does that send to the children of the school and the community?”

Windows in the gym where he coached the Golden Eagles in basketball were broken, Pollio added, making for cold winter practices.

In 1982, Pollio said Louisville residents rejected an effort to invest in facilities like Shawnee through a property tax increase.

Now, 38 years later, he is urging Jefferson County voters to approve a 7-cent property tax increase to help not only Shawnee but other schools particularly in west Louisville that Pollio said have been neglected for too long.

The improvements to Shawnee — which offers its signature aviation program in addition to career programs in manufacturing, business and health — are one of things Pollio said he vowed to see through as superintendent to “right this wrong.”

“I believe over the next decade … Shawnee will be a thriving school, with 1,000 students in here, great programming, 100% transition readiness, kids going to college,” Pollio said. “And (it will) really be a vibrant part of this community.”

One of the few people whom Pollio said had spoken out about Shawnee’s condemned third floor over the years is JCPS board chairwoman Diane Porter.

Porter said Tuesday that the last major renovation to Shawnee, which opened in 1929 as the Western High School for Girls and Shawnee Junior High School, was in 2002.

“When I stand here and I look at the work that has been done so far, I know that this will mean a lot for our students,” Porter said. “Our students deserve this renovated building.”