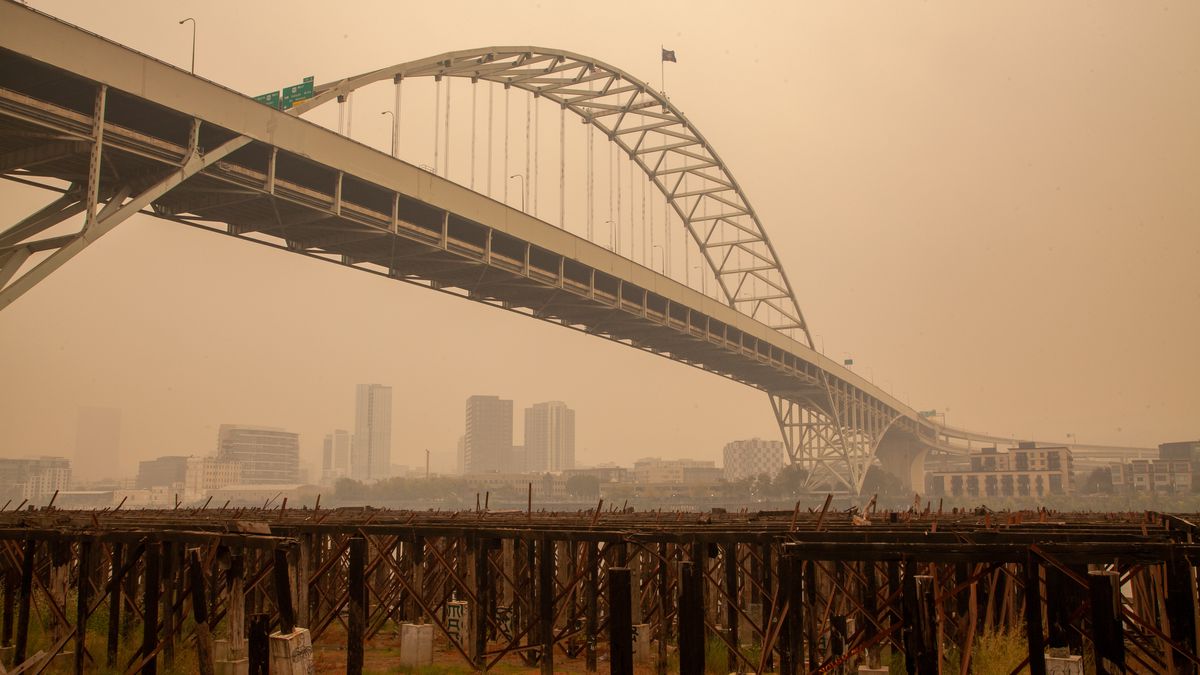 A week after wildfires began consuming thousands of acres in western Oregon, firefighters are making progress on some of the most destructive blazes in state history. State officials said Monday that 10 people have died, though that number was higher than the totals released by county officials, and 22 are still missing. Countless homes and businesses have been scorched.

Much of the state remains under an air quality alert that has been extended until noon on Thursday, as winds forecasters were expecting didn’t materialize.

Rebecca Muessle with the National Weather Service’s Portland office said that the thick smoke blanketing the west coast has made winds harder to predict, since they’ve stopped the warming afternoon temperatures that can create windy conditions.

“We do have a system moving in this afternoon into tomorrow,” Muessle said. “We could see some slight improvements, but realistically we’re not expecting enough that would really improve air quality drastically… In the last couple days, a lot of our forecasts have been burned by the smoke.”

Lighter winds from the west have calmed the hot, dry and gusty conditions that gave rise to the current firestorm, but some threats exist. Doug Grafe, chief of fire protection at the Oregon Department of Forestry, said increasing winds in central and southern Oregon could push fires to the east, and that expected rain in coming days could bring risks along with relief.

“That rain may come with some lightning and thunderstorms, particularly on the east side of the state, which could cause new fire starts,” Grafe said.

He pleaded with Oregonians to keep personal drones outside of fire areas, saying that firefighting aircraft, which have largely been stymied by smoky conditions, might have to be grounded “when we have a foreign drone in that airspace.”

The smoke combined with a layer of fog, keeping temperatures cool and suppressing fire behavior. Evacuation warnings were lifted for parts of Clackamas County, including Lake Oswego, Wilsonville and Milwaukie. Oregon City and other areas along the south border of the Clackamas River remain at evacuation Level 1: “Get Ready.”

Officials issued a red flag warning for all of Jackson County yesterday but the feared high winds never materialized. Although new evacuation warnings were issued as the Obenchain fire burning near Medford moved east, in other areas crews made progress on containment and continued to shore up fire lines.

Oregon’s largest wildfires remained roughly the same size over the weekend, as temperatures cooled and emergency managers scaled back evacuation orders in some areas. But in parts of the state where fires decimated whole communities, such as Vida in Lane County, Phoenix and Talent in southern Oregon and parts of the Santiam Canyon, residents are picking up the pieces — or forced to wait outside of areas still under evacuation mandates.

Holiday Farm Fire: The fire burning in Lane County east of the Eugene-Springfield area has burned more than 161,000 acres and has killed at least one person. While the Holiday Farm Fire is considered 5% contained, it still threatens more than 23,000 structures, according to fire officials.

Beachie Creek Fire: The 188,000-acre Beachie Creek Fire — also known as the Santiam Fire — had 563 people helping the effort, according to fire officials Monday morning. At least four people have died as a result of the fire burning through Marion County. The Beachie Creek Fire is burning roughly 1 mile from the Riverside Fire to the north, but officials have been downplaying the likelihood of the two fires joining. If they do join, fire officials do not believe it would result in “dynamic fire behavior,” as feared last week.

Riverside Fire: As of Sunday afternoon, the Riverside Fire in Clackamas County was more than 133,000 acres in size and was entirely uncontained. Officials say it has destroyed 53 structures, including 33 homes. Fire officials say 315 people are working on the fire, with a priority of protecting lives with a “dozer line” to “secure the areas closest to the communities of Estacada and Molalla.”

Almeda Fire: The fire responsible for destroying much of the communities of Phoenix and Talent in southern Oregon is estimated at 5,700 acres and 70% contained. Officials say the Almeda Fire, also called the Almeda Drive Fire, has burned 700 structures, 600 of which were homes.

Echo Mountain Complex Fire: The fire burning near Lincoln City remains at about 2,400 acres in size, and as of Monday morning is 25% contained. Evacuation levels were downgraded from evacuation Level 3 “Go!” to Level 2 “Get Set” for some neighborhoods south and east of Highway 18. Residents of these communities will be able to return home for the first time in several days.

U.S. Sen. Ron Wyden says the country needs to focus on preparedness and prevention to reduce the risk of catastrophic wildfires in the future. He spoke on the Senate floor Monday afternoon after spending the weekend in Oregon, where more than a dozen major wildfires across the state continue to cause widespread destruction to communities and hazardous air quality conditions.

“I and everyone else had smoke up to our eyeballs,” the Oregon Democrat said.

Wyden presented proposals that he said could help get western communities get a handle on wildfire risk.

“Let’s make this the day when the Senate chooses to take a dilapidated, an out-of-date fire policy and replace it with a modern strategy for the real on-the-ground conditions that have caused fires,” he said.

He said the balance is still tipped heavily in favor of fighting fire rather than preparation, despite the availability of $3 billion in a fire suppression fund.

Researchers say that a carefully-targeted prescribed burning can reduce the build-up of forest fuels that has happened in part because of historic fire suppression. This in turn can reduce the severity of wildfire, making it easier for crews to protect life and property.

Wyden also called for passage of the “21st Century Civilian Conservation Corps Act” he introduced in August. The legislation would create a New Deal-esque program that would pay young people to work in wildfire-prone areas doing fuels treatments and community protection work, among other conservation work nationwide.

State forests are closed to the public through at least Wednesday

Linn County authorities are looking into a series of fires that began within a two-hour period early Monday morning.

According to a release from Sheriff Jim Yon, deputies and firefighters responded to eight separate small fires near Sweet Home and Brownsville, beginning at 2:41 a.m. All the fires began within a two-hour period, Yon said.

The Linn County Sheriff’s Office is seeking a “pick-up described as a small, white or silver, 1990s Nissan Hardbody with a black canopy” that was seen near one of the fires.

Almost all of Oregon is covered in thick layers of unhealthy smoke. Researchers and health experts told OPB that having such high levels of smoke for so many people is unprecedented. In most of the West Coast, the air is not safe to breathe.

Sunday, the air quality index approached “hazardous” across much of the state. While the air quality is expected to improve, it will remain unhealthy in many areas for at least the next few days. Changes in fire behavior, winds and the geography of certain areas could keep some cities and towns at unhealthy levels much longer.

We’ve put together a guide to some of the most common questions we’ve received about the health impacts of wildfire smoke, air quality, how to stay safe and how it all intersects with the coronavirus pandemic.

Related: How to stay safe in a smoky pandemic: Your questions answered, and science explained

School districts in fire-scorched areas focus on safety before teaching

Coronavirus had already complicated the way school was set to look and function this fall for Oregon students, parents and teachers. Coupled with the pandemic, the danger of wildfire driving thousands of Oregonians from their homes has caused multiple K-12 school districts to delay the start of classes.

Brent Barry, Superintendent of the Phoenix-Talent School District in southern Oregon, said more than half of the district’s families had been displaced or lost their homes due to the Almeda Drive Fire that ripped through the area Tuesday.

“At this point, we are connecting with every one of our families to find out the immediate and urgent needs of students and family members to make sure everyone is safe, that they have their basic needs met as far as shelter and food and things that they need just to feel comfortable just moving on from this which will take months and years really,” Barry said.

More on what schools in Phoenix, Talent and the Santiam Canyon are doing here.

School and activity closures and cancellations continue for a second week due to Oregon wildfires and their impacts.

That includes most of the school districts in Multnomah County.

Chromebook distribution and meal service is canceled for Centennial and David Douglas families as well.

District officials say that some staff members have been forced to evacuate from their homes, making it difficult to teach in distance learning. And hazardous air quality makes it dangerous for in-person activities.

All Portland Public Schools sites are closed Monday, as well school-based activities, with one exception: meal distribution will continue, though hours will be reduced.

Online instruction at PPS will continue as schools shift from a “soft start” into more academic work. But the district said there is a “small number of educators” who may not be available to teach due to evacuations. For students in classes taught be teachers who’ve been forced to evacuate, PPS said principals will work out an alternate plan for instruction.

In Clark County, all in-person activities for Vancouver and Evergreen schools are cancelled, but remote learning will continue.

School districts located where the fires have done damage to the local community, have largely canceled school for the coming week, if not longer.

Evacuation status is being dropped from Level 1 “Be Ready” to normal for a large area of western Clackamas County.

A newly revised fire-evacuation map shows that the threat of fire has dropped for the Portland-area bedroom communities of Milwaukie, Gladstone, Happy Valley, Clackamas, West Linn, Lake Oswego, Tualatin and Wilsonville. The downgrade also applies to some areas near Boring and Damascus.

Evacuation levels remain unchanged for those areas in the county under Level 3 “Go!” or Level 2 “Be Set.”

Brown said she’s committed to making sure everyone can vote in November, including those who have lost their homes.

Although Oregon has relied on vote-by-mail since the late 1990s, Brown told CBS says everyone must be able to cast a ballot.

“We’ll make sure they have the opportunity to participate in this election,” she said in the interview. “In Oregon we believe that your vote is your voice. And every single voice matters.”

Brown added that “we continue to allow folks to vote in person if needed.”

More than 40,000 people in Oregon have had to evacuate because of the wildfires, Brown said. The fires have destroyed hundreds of homes, most of the structural losses identified so far are in southern Oregon, where the Almeda Drive Fire devastated the communities of Phoenix and Talent.